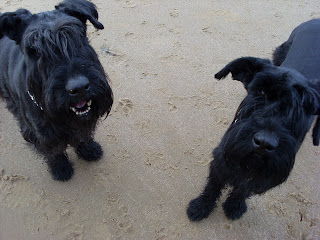 Three Go Mad In Scotland
Mmmmmmmmm smell that fresh air! Look at that countryside! Minxster goes wild in Scotland. Owner manages to have an entirely posh English accent yet claims Scottish country of origin. Entertainingly, after about 4 days back in Scotland, Owner says things like “Nae bother” and “Wee snack put ooooot on ta floor doooogies”. And after a few days back in England the accent has gone. Most peculiar. Maybe if I went to Germany I would have an accent, too.

Anyhoo. Owner took us out to the butchers, WE LOVE THE BUTCHER HE RULES!!!!, and we got some yummy raw Scottish beef mince to eat, and the butcher (who loves us too) gave owner a HUGE bag with raw bones in. Owner, being vegetarian, served us our tea whilst gagging at all the lumps and bumps and blood. I reckon what she needs is Systematic Desensitisation so being a very helpful little dog I quite often like to run after Owner with a bit of dead animal hanging out of my mouth while Owner squeals. I might bury a raw chicken wing in her bed to help her along.

We like to go walking round South West Scotland – Port Logan, Glenluce, Stairhaven, Stranraer – although Owner’s favourite walks are usually in woodland or towards St Helena’s Island next to the river. It does get crowded during tourist season and we can see as many as one or possibly two other people during a two hour walk. The rabbits are BIG here with very very long legs, and obviously Owner knows them well because she calls them all ‘dear’. Tula and I quite often track their scent, but the long legged rabbits are very canny and not nearly as stupid as the small ones we normally catch. When we have had a long ambling walk we unfold the sofa bed and all three of us snooze until Grumpy child tells us he is HUNGRY and needs FEEDING. I don’t know how he works up an appetite – maybe pressing buttons on his Xbox 360 handset is very hard exercise.

During this holiday we went to Sandhead. The bay was very calm, and our good friend Morgan the Mad Labby went piling into the sea and decided to try digging up stones underfoot. Just in case it was a pork chop or similar, Tula and I went charging into the sea. However, there was a BIG DIP right next to where Morgan the Mad Labby was playing to Tula the Perfect Dog and I suddenly sank up to our necks in the sea. Both of us were fairly startled, but after this experience I decided to play boinging through the waves. Tula was cross that she had got soggy so she chased the seagulls in lieu of bunnies. We tried a similar trip to Port Logan a couple of days later but to Owner’s horror there was 3 ft wide red/ orange jellyfish on the beach. I was up for trying to taste one, but Owner is petrified of jellyfish. Luckily none of them came running after us so we escaped with our lives.

When we got home Tula the Perfect Dog found her newly operated on toe was bothering her. She is now having to be re-operated on. Tula the Perfect Dog is frankly quite a nuisance with a lampshade on her head. She uses it like a battering ram so you have to be fast to get out of her way. After a while I got sick of her whinging about her toe, so I decided to help her by licking it for her as she couldn’t reach. Genius. Except Owner didn’t think so. She slapped her own forehead and told us that the two of us working in cahoots together could be very bad news. And then she poured herself a glass of wine. But deep down, she loves having us about because life is never boring when you share it with a Giant Schnauzer or two……
Posted by Minxster the Naughty Giant Schnauzer at 13:54