Minxster gets a new Father. 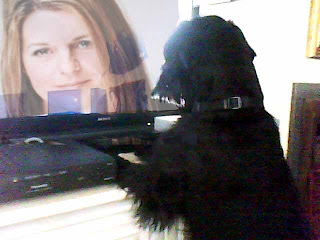 Well, it has been quite some time since I got my paws on the old netbook. Tula the Perfect Dog is, annoyingly, still perfect and Owner still worships her. For some reason Owner doesn’t appreciate the things I do for her, like eating the old sofa so she could treat herself to a new one, helping to defrost loaves of bread in my stomach, playing find and seek (and munch) with a seemingly never ending series of remote controls... and my latest trick, showing Owner how much I care for her by refusing to get out of the car after a morning walk when she wants to go to work.

But something HORRENDOUS has happened. Owner brought some bloke home. Don’t get me wrong, he’s quite a nice chap, and even has a beard so he looks a bit like Tula. But Owner goes all gooey over him in a most unsettling way, quite frankly. On the plus side, when he stays over there’s an extra pair of socks for me to whizz and add to my collection, which also leaves him looking a bit puzzled when he tries to find his socks in the morning. Anyhoo, Tula the Perfect Dog and I were rather hoping he would sling his hook and leave US getting all the attention, but no, it turns out annoying chap is SPECIAL.

Annoying Chap and Owner were apparently married (I think this is some king of punishment for bad behaviour) for many years and then broke up for no good reason that either of them can think of now. So Annoying Chap and Grumpy Child (who is now 6ft 2ins) are best buddies too, which means on the plus side, Owner, Annoying Chap and Grumpy Child sometimes sit up watching the TV box in the evening (that's me looking at Owner on the TV at the top of the blog). Owner usually falls fast asleep which gives a perfect opportunity to clamber up and snore my head off whilst resting on Owners shoulder. Sometimes Tula the Perfect Dog shoves her cold nose in Owner’s face just to check she is OK and this gives such a loud reaction that both of us can see where Grumpy Child got his Grump from.

Initially Annoying Chap was a bit surprised to find a dog that can do an impersonation of a Harrier Jump Jet to clear 5ft fences, but he is used to me now, which also means Owner has some company when I decide to run off on a walk, and they can both scream for me together, which must be nice for her.

Sometimes Annoying Chap plays the guitar, which can be fairly alarming to a Handbag Sized Giant, particularly on high notes. On the plus side, I suspect the guitar will taste pretty good, and it is only a matter of time before it is left unguarded. Annoying Chap also likes to take video footage of me because thinks I make some funny noises (who doesn’t go “WOOOOOOOOOOOOOOOO” when their breakfast is being made?), and he will share a sofa with me, so he isn’t ALL bad. He also forgets I can get a dish out the sink, which has made for a good few tasty snacks of things I am not supposed to eat, although sometimes this means I need to go to the garden VERY QUICKLY.

Anyhoo, unless someone can get shut of him for me, it seems Owner is going to have him about stealing some of our space, so he’d better learn whose boss quickly, I can tell you. But I’m not telling you whether that’s Owner or Tula...... :D

Posted by Minxster the Naughty Giant Schnauzer at 13:37