The Not Food Diet 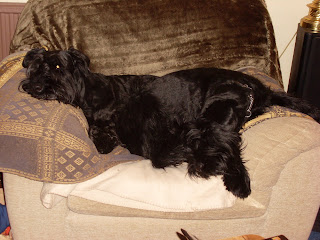 This week started with a brilliant new trick. Owner came in from popping out to the shops and I greeted her from the top of the dining table. Owner was so astonished that she completely forgot to tell me quite how clever I was for managing such a skillfull thing and instead she let out a noise that sounded like a pressure cooker boiling over. Owner isn’t always as bright as me though, so she didn’t work out the motivation behind my fantastic trick. Next to the dining table is a very high unit, and near the top of it is a Tupperware tub with yummy treats for me and Tula the Perfect Dog. So when owner left the room next, I mountaineered seemingly dog-proof furniture and whizzed the goodie tub. It was full of dried fish, which was a pretty good find.

Unfortunately, I ate much more of it than I should have done, partly because I am greedy and partly because it was fun knowing I was eating Tula the Perfect Dog’s portion too. Quite soon my stomach started to rumble and grumble in a very worrying way. I went outside and was very alarmed at what happened at my rear end, but suffice to say the pond has a waterfall that isn’t dissimilar. At this point it sounded like Owner said “NO FOOD FOR YOU FOR 24 HOURS UNTIL YOUR TUMMY GETS BETTER.”. I thought this was quite a funny joke until my food bowl got presented at tea time with some water and some glucose in it. I tried turning the bowl over to see if the food was hidden, but no, Owner was obviously trying to STARVE ME TO DEATH.

Giant Schnauzer are not good at being hungry. In fact, it is something that Minxsters are naturally bad at. So, when Owner had to go out to put petrol in the car and pick up a pint of milk, she came back to a much fuller Minxster. Not the fridge contents, I’m working on opening the fridge but haven’t perfected yet. No, it was my blue plastic tugger toy. Usually I play with my toy and chew it a little until Tula The Perfect Dog removes it from me. If I REALLY love a toy, I run off with it and bury it at the back of my dog crate. But this particular day I had a bit of a chomp of the toy, then thought it tasted better than the glucose and water, so I ate THE WHOLE THING. Which was quite some feat because it was a large toy. Owner knew nothing about my snack until my tum started to make bad noises again, and bits of the tugger came out the rear. Owner looked at the peculiar blue poopy and then searched the house hoping to find the rest of the tugger. Stupid Owner, why would I leave something that was (sort of) edible? So Owner looked at me sadly and said “We are going to have to starve you another 2 meals, Minx”…. AAAAARRRRGGHHH!!!!

Hungry, hungry, hungry. Tula started to look good to eat, but she has pretty big teeth so that was OUT. Owner has put the rabbit’s cage behind two rows of fire guards, so that was OUT (but tempting). But when Owner was tidying upstairs, my climbing skills got the better of me, and I got my paws on the Tupperware that had the dried fish in that caused the whole problem in the first place. Had it been filled up again? Sadly, no. So I ate the Tupperware. After this my tummy felt BAD. And soon, Owner’s carpet looked BAD too (oops).

It took 2 days for all the plastic to make its way through my system. Owner said she had never seen so much poopy that was almost entirely plastic. It was like I had turned into a rather unsavoury Lego making machine. Owner looked after me carefully in case I needed to get to the vet at any point. She also said useless stuff like “If you wouldn’t have eaten so much shite then you wouldn’t be feeling so rubbish now"…..like THAT’S gonna help after the event, thanks a lot. Next time Owner drinks too much I will point the same thing back out to her. But I think Owner has learned her lesson. Unless it can run faster than me, it comes under the category of food in my mind. Now, where’s that table leg…….*sound of chomping*
Posted by Minxster the Naughty Giant Schnauzer at 03:34