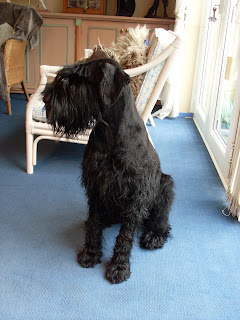 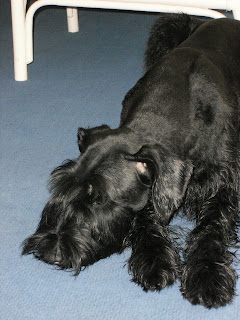 Someone call the RSPCA. Owner is trying to freeze me and drown me. I’m not sure exactly what I have done wrong – there are so many things to choose from, but it must have been reeeeeeeeeally bad.

It was raining this morning, so rather than go out for my usual bounce and charge over the sand dunes, owner got a table out and called us both for a GROOM. Occasionally when we are out people ask owner who grooms us, and she says she does. When they ask where she trained, she says “At the School of Being Too Broke to Take The Dogs to a PROPER Groomer”. Well, I don’t know where this school is but I can tell you their customer service training is rubbish. Owner got the clippers out and whizzed my coat off so it’s all cold and brrrrrr –like. And just as I was wondering if the reduction is weight would help me to catch more rabbits, owner waved some chicken at me and scarpered upstairs. Fast as a fast thing, I charged after her and discovered myself trapped in the bathroom with a grinning Owner. I was picked up (there was much grunting and groaning from Owner at this point, so Owner needs to get to the gym more often) and put in the bath tub. Owner jumped in, and then turned the shower on. Bubbles flew everywhere and then I was dumped back out on the floor. I smelt like a vet’s surgery, but Owner said that the shampoo made me smell gorgeous. Shampoo? What was wrong with smelling of stale fish and REAL poo??? Anyhow, while Tula the perfect dog was being conned into the drowning machine I escaped between Owner’s legs and out the door. I must admit, that the idea of watching Tula the Perfect Dog being drowned was quite appealing, but the idea of being drowned for a second time was NOT. Well, Owner’s bedroom was straight across the landing so off I pottered. There was some dry clothes hanging over the radiator so I pressed my head into those and pushed my body along them to dry those bits that are hard to get too. Handily the clothes landed on the floor, so that gave me something warm to wriggle on to sort my wet back. But really, the short hair and the bathroom dunking left me a bit cold so I needed to warm ALL of me. So I came up with the stunning idea of getting INTO Owner’s bed, which was very comfy and just the job for a few ZZZZZZZZZZZZZZzzzzzzs.
About ten minutes later I was awoken by Owner who was not so impressed by my Giant Schnauzer Dry Cleaning Invention. Turns out she had JUST WASHED THAT! (Me? Or the Bed?) and for some reason this meant it was bad that I had wriggled all over it. Probably cos I made it smell of the nasty shampoo (HA! ). Tula the Perfect Dog had a few words to exchange too, so there was much barking and bouncing off furniture for about ten minutes until Owner announced she was GETTING A HEADACHE. I can’t wait until tomorrow so I can roll about in dead seagulls and mud so I can show Owner just how beautiful a Giant Schnauzer can really smell.
Posted by Minxster the Naughty Giant Schnauzer at 10:21