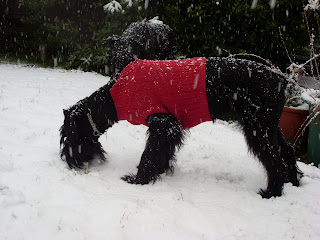 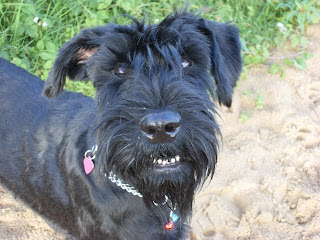 It has been a very adventuresome day for me today. My Owner selfishly went to work for a couple of hours and when she came back she remembered she needed to go to the shops to return a can full of stuff that turns her orange. Or in this case, she staggered around looking like an Orangutang until the gunk dried, and as soon as she took a shower she was back to her normal slightly scary pale colour. She says she needs to put it on so her legs don’t scare her dance students when she has her shorts on. But if I saw someone with legs that look like an orange and white Bumble Bee, I’d be petrified….
Enough with the social commentary. So when Owner came home I thought I was in for an afternoon of finding interesting positions to nap in, annoying Tula the Perfect One or Bin Destruction. But Owner got our leads out! Most unexpected given that we had already had a long walk where I almost behaved. Well Owner pulled out a red and white spotted scarf that looked like it should be in pantomime on the end of a stick with all one’s worldly belongings inside…and knotted it firmly around Tula the Perfect Dog’s neck. I was sniggering away to myself when the most horrendous thing happened. OWNER PUT ME IN A JUMPER. A bright red jumper with a black paw print on the side. There was no time for rolling about to get it off, Owner was out the door with 2 surprised Giant Schnauzers being marched along.
We went along a busy road, which I am trying to get used to, although I don’t particularly like a lot of traffic. And then we went in a building and down some stairs…..and a huge big thing came thundering along some rails and swallowed all the people waiting on the other side! It was very shocking for a Minxster but particularly when one arrived on our side and I was expected to get on. Are you kidding me??? Tula the perfect dog got on, but I spread my paws out so I couldn’t be moved. Owner picked me up and plopped me inside which was the second most humiliating thing to happen after THE JUMPER. Lots of people looked at us on the train and I’m sure one or two were sniggering but owner said we looked LOVELY. Oh please. If you think it’s so lovely why don’t you wear it Owner.
Wandering around the shops was full of interesting stuff like food on the floor, pigeons who cant run properly who were within Minxster radius, small children waving sweets around and a lady who came over and said we were adorable so went to buy us some treats. Owner said she thought she should have put a hat on the floor, and then she could have sat cross legged and collected donations from all the people who wanted to make a fuss of us both. It’s the jumper, I swear.
We also bumped into a Norwegian lady who had a 13 year old Giant called Tanya in Norway, then shortly afterwards we met a family who have a Giant called Lucy and a mini called Pippa. My Owner tried to give us away to this family in exchange for a few quid, but luckily she was only joking and said she couldn’t live without us.
On the way home a FANTASTIC thing happened. The man sat near use ATE A PORK PIE. We both watched very very carefully as he ate it, and he gave us some funny looks but strangely didn’t give us any to eat. But it kept us both very busy until our stop, and the return journey was much less scary for a little Giant Schnauzer. It was very cold when we got off the train so I was rather happy I had THE JUMPER on. So Minxster has now conquered trains, without peeing on it, barking the entire journey or bouncing off the walls. It just remains for me to empty the bin all over the lounge to teach my Owner not to dress me up.
Posted by Minxster the Naughty Giant Schnauzer at 11:06