Is that a Labradoodle? Or a Kerry Blue? 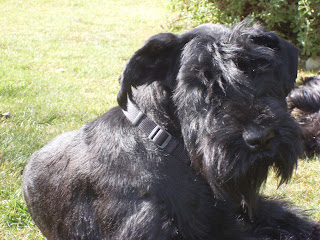 No, I am not, thanks for asking. A Kerry Blue is notoriously difficult to train and I am perfectly happy to do as I am told (providing it is what I was intending to do anyhow….). My owner does insist on attaching bells to my collar so she can hear which direction I have disappeared to, because sometimes when she yells for me to return, well other stuff is just a bit more interesting….particularly if it is (or was) rabbit shaped. Whereas Tula the perfect dog will chase a rabbit via a Ninja like sneaky stealth approach, I work on the kangaroo approach, which involves jumping high into the air and splatting down on undergrowth, brambles and thorns until something runs out (or maybe just gets flattened, you never know). At this point I make a high pitch squealing noise but strangely the rabbits seem to disappear into thin air somewhere close to these BIG HOLES. At this point I go to have a look where I first found the rabbit in case it has gone back there and is waiting for me.
Although I can run faster than a fast thing moving fast, I don’t often catch a rabbit. But sometimes I manage to find one that is already dead, often with a head or some legs missing. This is an opportunity to take it back to my owner who shrieks loudly, obviously because it’s such a nice thing to bring her. We can either play three way tug of war with Tula while my owner says "DROPIT DROPIT Oh my god I’m vegetarian please just drop the horrible thing before I vomit" or sometimes, if it’s busy, she walks ahead and pretends I’m not her dog while I trot behind with it swinging about…..Interestingly my owner also has a pet rabbit. When I first moved in here I enjoyed staring at it just in case it fell out of the cage, but for some reason it doesn’t want to play with me. Damn.
People often stop us and ask what I am. I am a dog, silly! I am still a slightly peculiar shape though cos my owner trims me herself and I hate anyone trimming my face. My hair was quite short when I moved into Palace du Tula, and growing out a beard is a LOOOOOOONNNNNGGGG process. So my face looks a bit scruffy. I also had a lady operation a few months ago, so I have a patch of short hair on my leg and on my tum. And due to my undergrowth bouncing I am usually covered in sticky buds. This resulted in owners relative saying "OMG have you seen the scabby ear on your dog?". Luckily my owner didn’t smack them in the teeth, but instead removed the sticky buds, causing the relative to think she had just ripped a massive scab off my ear. She turned a very funny colour, but luckily I was there to lick her face and chew thoughtfully at her coat. After my owner grooms lots of sticky buds off me, its fun to either sniff them again or roll in them, it makes owner say "Why do I bother?" but of course if she doesn’t remove them I roll on her bed so they stick on her duvet. Tula the perfect dog also gets sticky buds, and if they are not taken out immediately then her majesty will pull them out, leaving huge tufts of hair all around her to TEACH OWNER A LESSON for not doing as she has been trained. Owner dislikes this because every single strand of Tula’s hair is a treasured item. Unless she has rolled in fox poo, ha ha ha.
Another thing people ask is if we are related. I presume they mean me and Tula cos owner is bald all over her body – her fur must have fallen out, although she still has big eyebrows. Sadly her beard hasn’t grown on her face either so she can’t drip water all over people after having a drink (often). Tula is related to me via her grandfather although you wouldn’t really think so to look at us both. Tula is more stocky and broad, I am quite slim – although I have put some weight on since I came here – I was very very slim when I arrived, despite the lady who looked after me trying to get some weight on me too. It may be that I will bulk up a little bit as I get a bit older, but my nice German vet keeps saying I am a perfect weight (but then she does something very peculiar with a thermometer so we won’t dwell on that). So in reply to the original question, I am, and always will be, a Giant Schnauzer…..and as a breed we are very good at search and rescue. Particularly if it is a rabbit we are looking for. Although the rescue bit may need some work…… ;-D
Posted by Minxster the Naughty Giant Schnauzer at 13:36