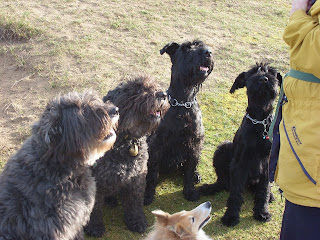 Well it’s a long time since I have written on my blog, bad Minxster. But I thought I would share my latest adventures with my readers, because I don’t want anyone accusing me of changing since I found FAME. No autographs please, and pictures with the authorisation of my management team only.

On Friday evening Owner was ill….she sometimes gets migraines and on this particular evening she came home as white as a sheet and fell into her bed upstairs. I use the term ‘her’ bed loosely. Us Schnauzers are very caring souls and we hate anything being wrong with those we love, particularly when they are the ones that feed us and walk us; very, very worrying. So I jumped on one side of the bed and squished owners tummy with my paw which made her groan so I knew she was still alive. I lay on the bed next to her and put my head on her shoulder, while Tula lay on the other side of Owner. The Tula side was the one with the vomit bucket, so I was pretty pleased not to be on that side thanks very much. Well Owner soon felt right as rain, but we had all gone to bed very early. Obviously that means we MUST get up early too, so I helped her remember that by barking and howling at 5am. She was very happy that I did that because she played a game where she pulled pillows over her head, but Tula and I soon pulled those off, and then we had a tug of war with the duvet. Fun!

But things soon changed when we got downstairs. Owner poured about half a pint of coffee down her throat and through her bleary eyes she started inspecting our coats. Before I had chance to hide under the dining table, the grooming table was out and I was being manhandled by a half asleep Owner. Tula and I were trimmed and chopped, then shampooed and trimmed again, blow dried and primped and combed. It was very exhausting for me. Particularly when she trims the hair around the pads of my feet: “Tee hee Owner stoppppit that tickles…”. Having started at 5.30am, by 11.30am Owner was happy that we both looked ok, (and also we had got wise and were now running away when the comb came out).

Then we jumped in the car, but Owner wouldn’t let us shove our heads out the windows, so we just barked at passing dogs from inside the car which I think Owner really enjoys. We were taken to a park full of lots and lots of different dogs, Staffies, Labbies, Bull Mastiff-ies, Spangles (editor: Spaniels?) Bananaramas (editor: Weimaraner?), Terrorists (editor: Terriers) and a Enormous-Great Dane, and I haven’t seen so many dogs since we were at a……..hang on a minute….oh my god, Owner has brought us to a DOG SHOW. On the plus side there are lots of exciting bottoms to sniff and the odd dropped hot dog, a nice man was giving away poop bags – possibly because Tula did something that looked like it was so big that there may have been a different weather system at the top…but Owner ALWAYS picks up after us.

Well, we started walking in a big circle in the show ring and Tula did her special prance because she is a bit of a show off in these situations, but she was wasting her time because Owner had accidentally put us into both ‘Dog with the Waggiest Tail’ when we have no tail, duh, and ‘Worst Behaved Dog’ which I really thought I had a shot at. Sadly for me, there was a fabulous Lakeland Terrier who attacked his own lead all the way around the ring who won; he is my hero.

There was then a dog display with lots of clever dogs who bounced and boinged over stuff which was so interesting I nearly got my head stuck in the railings. But then they used firearms to make loud noises to show how well trained some dogs were in catching baddies. This may or may not have been interesting – I wouldn’t know because I bolted for the exit before there was anymore bangs. The Great Dane nearly jumped his own height again too, so it wasn’t just me who got a surprise.

After being coaxed back with bribery, I sat shaking for a little while until Owner’s friend arrived with a cute little Staffy who didn’t like her bottom being sniffed – but loved being made a fuss of by Owner. This distracted me just enough that when they did the next categories for the dog show I was no longer like a jelly. Categories came and went but we didn’t win anything. The very last category was called, and during our walk around the ring both Tula and I decided we would have a pee while Owner went a funny shade of pink and covered her face with her hands. The Judges pointed to us and said “Best in Show”…. Owner was all huggy and kissy with us both (euuurgh) and we got a huge purple and white rosette and people took our picture. Owner was blubbering all over the place because it turned out I won! Although Tula says WE won and it was largely thanks to her special trot. Funnily enough, on the way home Owner said SHE won because she had done the grooming, but we all know Owner doesn’t know what she is talking about. So now I am a famous Minxster I am expecting stuff to change around here, like for starters this grooming lark can go out the window so I am off to run through the shrubs at the end of the garden and get scruffy again….

This blog was done in memory of my close doggy pal, Alice, pictured above, who went to Rainbow Bridge recently. We will all miss you.
Posted by Minxster the Naughty Giant Schnauzer at 01:35