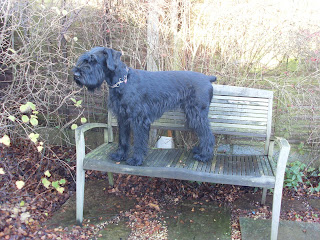 Well Owner has been very busy so I haven’t been up to my usual amount of adventures recently. But Spring has sprung which had caused all manner of havoc at Tula Towers. Strangely, Owner has decided that brown doors should be white doors. I have no idea why this would be important but apparently it “JUST IS.” A long and well thought out argument there. So Owner trots off to her local DIY store and buys a big tin of white gloss. For most people who have met me, the words “white gloss” and “Minxster” are a combination that should never ever go together.

Much to Owners great surprise (and losing a £10 bet in the process) it was NOT me who managed to run through the house with white gloss on my paws. And sadly for Tula the Perfect dog, the evidence was still on her paws. So whilst Owner was on her hands and knees pointing at the carpet and telling Tula the Perfect dog that she had really let the side down, I decided to have a snooze in the sunny patch by the big window in the back room. Or so I thought.

Next to my lug hole came a “tappity tap” noise, but when I opened my eyes there was nothing there. Owner and Tula were still deep in conversation (although it did seem pretty one sided). So I rolled on my back, and drifted off again only to be woken by a more insistent tapping. Outside was a bird, that spent the next week tapping on the window seemingly whenever it got bored. At first I barked my head off at it, but over the next week I discovered that this made not a jot of difference. Except that sometimes it waved its wings too.

To be honest I thought Birdy was a bit of a nuisance, but the whole household got used to it bouncing and tapping and waving on a regular basis. That is, until one evening when Birdy was tweeting and waving at me and I spotted a miniature tabby tiger creeping down the garden – and it wasn’t thinking friendly thoughts. Birdy was so busy jumping and waving and tweeting that even when I started bouncing up and down I think Birdy thought it had turned into a two-way game.

Luckily Tula realised that the door was open and went tearing down the garden after the cat. By the time Owner wandered out to see what was going on, we had the cat cornered half way up a tree. Owner went out and shouted at the cat that she didn’t want it trying to eat the birds and would it kindly shove off. The cat obviously took this as a threat and went to the very top of the tree where is promptly got stuck. Had it been Christmas it would have made a pretty good ornament if it would have had a couple of wings stuck on its back, but it was Easter so seasonally incongruous. Tula and I had got fairly bored at this point due to the stalemate situation, until Owner decided to try to rescue the cat, who in thanks, then arched its back, hissed and spat at Owner. This was obviously and attempt to attack and maim Owner so we both felt it was important to look fierce at the bottom of the tree. In retrospect this probably didn’t help the now stuck and petrified cat. We were removed back inside the house while Owner tried to work out what to do about the stuck cat. It started to go dark. We could still see the silhouette of the cat from the window and Owner started to feel quite sorry for the cat - but it wasn't moving. At this point it started to hail huge hail stones at which point the cat decided that being stuck AND pelted wasn’t much fun so it scampered down the tree and was off into the darkness.

And after that great shock, what has happened to Birdy? Absolutely nothing, the annoying blighter is still tapping away but now we are all on guard patrol to make sure it doesn’t get eaten. Although the cat is probably reluctant to return after being chased by a Schnauzer covered in white gloss. It certainly made Owner scream when she saw Tula doing her best Dalmatian impression. For once, I’m not in the dog house. But I’m sure I can change that given enough time....
Posted by Minxster the Naughty Giant Schnauzer at 00:04