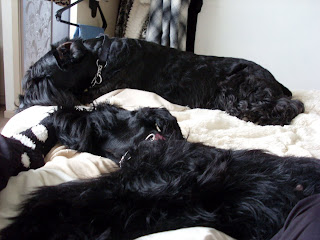 Hello and welcome to my…..

Ok, lets go into the other room. This week something sad happened. The rabbit died which made Owner very sad as it was nine and a half years old. Tula the Perfect Dog was very sad as she didn’t get to eat it. But it is buried in the garden which could be a future challenge for us.

Today we went out in the garden when the most GODAWFUL noise came from a garden nearby. It sounded a bit like someone was being strangled but louder. Owner came wandering down the garden with her hands over her ears and went for an investigation. It turned out that one of those miniature domestic lions had decided to go break dancing in an old football net in the one foot space behind someone’s garage. There is a garage on one side of the space, and a 7ft fence on all of the other sides. I’m sniggering to myself thinking who on earth would be stupid enough to go down a one foot wide space because they are bound to get stuck, when suddenly a HUGE ladder sticks in the air from next door, and OWNER goes wobbling up the ladder!!! She throws step ladders down the gap and disappears from sight. Tula and I are not sure quite what to do for the best here, so we decide that barking lots will help the situation. Meanwhile, Owner finds a very pretty long haired white fluffy cat with tight net twisted around its throat and legs. It is unable to move, is petrified, is bleeding and is trying to eat its own leg to try desperately to free itself. Owner is not really a moggy person, but is most definitely a rescue an animal kind of person.

Owner shouts to a neighbour for help and the neighbour rushes back with scissors. As soon as Owner cuts one bit of net away, she finds more and more net hidden under the fur. Cat is so tired and sore it isn’t really fighting or struggling. In fact, Owner said the only reason she knew it was still ok was that it was still yowling…..

Owner was still working in a very tiny confined space, but eventually cut all the net away. She pulled the cat up and put it on her shoulder at which point it started purring for a while….but then owner couldn’t actually climb out the awkward space with the cat. Hmm, big problem then. Huge problem actually because Owner feeds me, and Tula is bigger than me so I cant eat HER. Anyhooo, when the rabbit went to the carrot patch in the sky it left behind it’s vet carrier box. So neighbour rescued the box and poor kitty was put in the box, which enabled owner to make her wobbly clamber up one ladder with the kitty in one hand and sort of leap to the other ladder avoiding breaking the fence and probably her neck too. I was pretty glad to see her because there was rusty nails everywhere and god forbid she should injure her can opening arm. Kitty is SO happy to be in the box it says “RRRRRRRRRRRRRRRAAAAAAAAAAAAAAAAAAWWWWWWWWLLLLLLLLLLL"
How does something that small make so much noise? At first I thought it would be great to keep it as a toy but even I had enough of the noise at this point.

Well, Owner takes kitty to the vet, and vet says kitty is going to live. Kitty has a leg it cant stand on, but it’s not broken, it’s just sore from being tangled up in a funny position. A bit like Owner when she can’t sleep and gets all tied up in bedclothes and annoys Tula by wriggling about. So then Owner comes home and has to find who actually owns Yowling Kitty. Although, quite frankly, I’m surprised everyone within a 10 mile radius don’t know where Yowling Kitty is. So how does Owner find where Yowling Kitty lives? She knock on the door of every 5th house in the area until she finds someone who points her to the place where a long haired white cat lives. And inside the house was a very worried lady who cried when Owner told her that Yowling Kitty was OK and not squished. Which was all well and good and daredevil Owner was intact. Except now I seem to have another visitor on the other side of the fence trying to say “Thank you”……

*Minxster puts paws over ears*
Posted by Minxster the Naughty Giant Schnauzer at 14:44